The Importance of the Whole Developer (Part 2 of 8)

[EDITOR’S NOTE: This is the 2nd of a eight-part series, where we delve deeper into the Whole Developer concept and each of its elements. This week, we’re talking about why the Whole Developer is important. If you missed Part 1 of the series, please click here]

Why Do We Need Whole Developers?

Pop culture, and especially the tech industry, tends to define the greatest innovators as those for whom rules, boundaries, and norms don’t apply. These people are rewarded and even revered for breaking down norms and showing disregard for the rule book.

Jony Ive, designer of the iPod, iPad, MacBook Pro and Air, and iOS 7, described how Steve Jobs felt “the normal rules of social engagement… don’t apply to him. Because of how very sensitive he is, he knows exactly how to efficiently and effectively hurt someone. And he does that.” Indeed, Steve is the notorious figure in the industry known for never sacrificing his conception of innovation for politeness and respect.

Paul Graham, co-founder of Y Combinator, says in his book Hackers and Painters that “good programmers often want to do dangerous and unsavory things.” He goes on to say that others have to accept that and let them because, he argues, that’s the best process for hacking.

Is it possible to stay true to the geek tribe while also achieving success? How can we ever know if these traits we traditionally associate with great innovators actually hold us back from achieving even greater success?

What if, with a little more tact and respect, there were actually more dents in the universe to be made?

Can we be incredible innovators and cherished colleagues at the same time?

AngelHack dealt with this firsthand this past December. So has GitHub, RapGenius, and even Kleiner Perkins on the VC side. Most recently, RadiumOne and PayPal.

We at AngelHack see a common thread across not only these incidents but also across the tech industry at large.

We’re missing a convenient and tailored way for hackers to understand, learn, and develop valuable soft skills on their journey to becoming founders.

Within the Whole Developer initiative, our theme for our Spring 2014 world tour, we’ve established 6 core competencies which we believe to be requisite to achieve and maintain big success.

The Whole Developer in Action:

The cold, harsh reality is that by some measures, the tech industry is still somewhat small, concentrated, and therefore, insignificant on a national scale. Even in San Francisco, the tech industry only makes up about 8% of the total workforce.

And yet, we tech developers and entrepreneurs so easily forget about those around us. How ironic, as the Internet – our lifeline – was created to bring people together. But how easily do we forget about those who don’t have access to the Internet? Or even within our industry, and even our companies, when we can’t communicate and collaborate with folks who don’t code (like the marketing department)?

To paraphrase Mike Judge in his excellent Silicon Valley series, you need both Steves. You need both Jobs and Wozniak. Great code will only take you so far – you must be able to package and present it to all your stakeholders: colleagues, users, investors… the world around you.

In this sense, not only do you need Jobs and Wozniak, you also need Jony Ive, Peter Oppenheimer, Tim Cook, Eddie Cue, Ron Johnson, and everyone who works under them. Would the iPhone have been so successful without its impeccable design, UI, and marketing?

This, more than anything, is what the Whole Developer is about: being aware of our interdependence, our reliance on those around us.

Fortunately, we don’t have to start from scratch. There are plenty of others who’ve set a precedent for being Whole Developers. Mikkel Svane, CEO of Zendesk, knew that in order to get his company off the ground, he needed more than just his own skills. Though he may head a $632 million company, in true Danish Law of Jante fashion, Svane still recognizes he doesn’t know everything and actively seeks out those who can help mentor and guide him through areas he’s unfamiliar with.

Tony Hsieh knows that if his employees aren’t happy, then no salary, no new initiative, no OKR or KPI’s will ever change that. Zappos is built from the ground up to encourage team building and cohesion, to get people out of their solo desk or head space and participate in a community. Hsieh believes that this is the reason the company is able to go on and do such incredible things year after year.

And then there’s Phil Libin, founder of Evernote. He spends much of his time taking a step back and being mindful of his abilities and his leadership style. He has also famously taken harsh criticism from the press and used this to publicly refocus the company’s efforts. Pretty impressive in an industry not exactly known for its humility.

“Let’s only build things for us, that we’re in love with and we want to use. Let’s build a company we want to keep. Let’s explicitly say there is no exit strategy. Let’s make something that is sufficiently epic to be our life’s work.” – Phil Libin, Co-Founder and CEO of Evernote at Startup School 2013

For the developer who now has $1.5 million in the bank and 10 people in the office: don’t freak out, and don’t fake your way through it. It’s not your fault that you don’t know how to manage a team or draft a P&L (Profit & Loss) Statement, and any investor that expects this from you isn’t the person you should be taking money from.

Instead, start thinking along the lines of “do I want to build a product, or do I want to build a company?” They’re two very different undertakings. Building a company involves creating structure, culture and values – which never happens overnight. From the top down, leaders set the examples that trickle down and coalesce into structure, culture and values.

Why should you become a whole developer?

“Perspective is more important than IQ. The ability to make big leaps of thought is a common denominator among the originators of breakthrough ideas. Usually this ability resides in people with very wide backgrounds, multidisciplinary minds, and a broad spectrum of experiences.” –Nicholas Negroponte, Founder of the MIT Media Lab

The skills that make up the Whole Developer – communication, team building, mindfulness, emotional intelligence, work/life balance and social responsibility – even if never completely mastered, are extremely powerful in all aspects of daily life.

You can write the best code in the world, but if you can’t work with a team, communicate your ideas effectively and persuasively, find inspiration, and sustain motivation, it’s likely you’re going to burn out. In a similar vein, if you neglect your own needs, or those of the people around you, you’ll create resentment, conflict, and emptiness – hardly a recipe for a happy, fulfilling life.

Broadening your knowledge and insight will also set you up for future breakthroughs – think of Steve Jobs trekking through India in his youth. While we might not be able to connect the dots going forward, we can definitely collect and align them so that when the golden opportunity to make a dent in the universe presents itself, we have both the craftsmanship and tact to do it – and do it well.

Additional Articles on the Whole Developer

A Practical Guide to Becoming a Whole Developer

Next week, we take a closer look at mindfulness skills. And be sure to sign up for our Whole Developer Program, coming this Fall!

Vote for Sabeen Ali, CEO of AngelHack, to Speak at SXSW V2V 2014!The Whole Developer 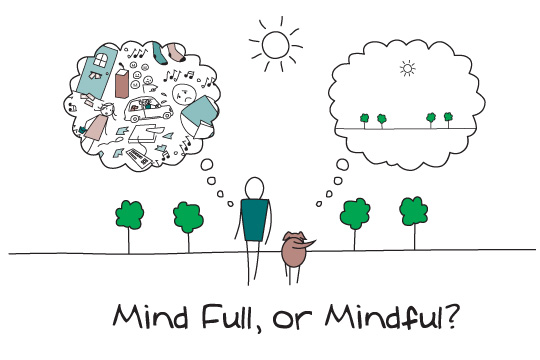